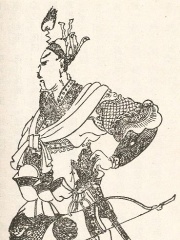 Zhuge Zhan (227–263), courtesy name Siyuan, was a military general and official of the state of Shu Han during the Three Kingdoms period of China. Read more on Wikipedia

Among politicians, Zhuge Zhan ranks 5,162 out of 15,577. Before him are Hannibalianus, Aulus Gabinius, Marcus Terentius Varro Lucullus, Elisabeth of the Palatinate, Juan Prim, 1st Count of Reus, and Gian Maria Visconti. After him are Edmund of Langley, 1st Duke of York, Hisham III of Córdoba, Skirgaila, Archduchess Maria Anna Josepha of Austria, Yamato Takeru, and Quintus Caecilius Metellus Numidicus.

Among people born in 227, Zhuge Zhan ranks 2. Before him is Paul of Thebes.