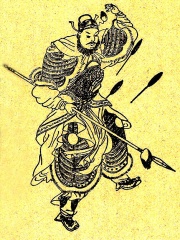 Zhang He (pronunciation ) (died July or August 231), courtesy name Junyi, was a military general serving under the warlord Cao Cao in the late Eastern Han dynasty of China. He continued serving in the state of Cao Wei under its first two rulers, Cao Pi and Cao Rui, during the Three Kingdoms period until his death. Zhang He began his career under Han Fu, the governor of Ji Province, in the 180s when he joined the Han imperial forces in suppressing the Yellow Turban Rebellion. Read more on Wikipedia

Zhang He was a military general and strategist for Cao Cao during the late Eastern Han dynasty and Three Kingdoms period of China. He is best known for his victory over Lü Bu in the Battle of Xiapi, and for being one of the Five Tiger Generals under Cao Cao.