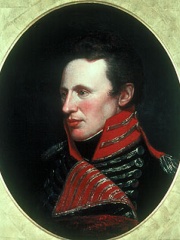 Zebulon Montgomery Pike (January 5, 1779 – April 27, 1813) was an American brigadier general and explorer for whom Pikes Peak in Colorado was named. As a U.S. Army officer he led two expeditions under authority of President Thomas Jefferson through the new Louisiana Purchase territory, first in 1805–1806 to reconnoiter the upper northern reaches of the Mississippi River, and then in 1806–1807 to explore the Southwest to the fringes of the northern Spanish-colonial settlements of New Mexico and Texas. Pike's expeditions coincided with other Jeffersonian expeditions, including the Lewis and Clark Expedition (1804–1806) and the Thomas Freeman and Peter Custis expedition up the Red River (1806).Pike's second expedition crossed the Rocky Mountains into what is now southern Colorado, which led to his capture by the Spanish colonial authorities near Santa Fe, who sent Pike and his men to Chihuahua (present-day Mexico), for interrogation. Read more on Wikipedia