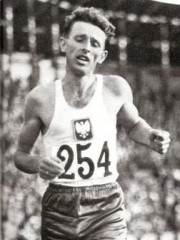 Zdzisław Ludwik Krzyszkowiak (Polish pronunciation: [ˈzd͡ʑiswaf ˈkʂɨʂkɔvjak]; August 3, 1929 – March 23, 2003) was a Polish track and field athlete, winner of the 3000 metre steeplechase at the 1960 Summer Olympics.Born in Wielichowo, Greater Poland Voivodeship, Krzyszkowiak won 13 Polish National Championship titles in long-distance and cross-country events. Krzyszkowiak rose to the international athletics scene at the 1956 Summer Olympics, where he missed the bronze medal in the 10,000 metres by 7.4 seconds, finishing fourth. Read more on Wikipedia

Since 2007, the English Wikipedia page of Zdzisław Krzyszkowiak has received more than 13,445 page views. His biography is available in 15 different languages on Wikipedia making him the 324th most popular athlete.