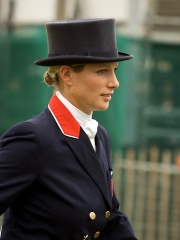 Zara Anne Elizabeth Tindall (née Phillips; born 15 May 1981) is a British equestrian, an Olympian, and the daughter of Anne, Princess Royal, and Captain Mark Phillips. She is the eldest granddaughter of her mother's parents Queen Elizabeth II and Prince Philip, Duke of Edinburgh, and is 21st in line of succession to the British throne. Tindall won the Eventing World Championship in Aachen in 2006. Read more on Wikipedia

Among noblemen, Zara Tindall ranks 904 out of 842. Before her are Duchess Gustave Caroline of Mecklenburg-Strelitz, Landgravine Caroline of Hesse-Rotenburg, Prince Carlo, Duke of Castro, Æthelric of Deira, Princess Beatrice of York, and David Stewart, Duke of Rothesay. After her are Constance of Normandy, Albert II, Count of Namur, Princess Mako of Akishino, Guillaume, Hereditary Grand Duke of Luxembourg, Stéphanie, Hereditary Grand Duchess of Luxembourg, and Pierre Casiraghi.