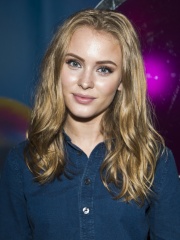 Zara Maria Larsson (, Swedish: [ˈsɑ̂ːra ˈlɑ̌ːʂɔn] (listen); born 16 December 1997) is a Swedish singer and songwriter. At the age of 10, she achieved national fame in Sweden for winning the 2008 season of the talent show Talang, the Swedish version of British TV's Got Talent. Four years later, in 2012, Larsson signed with the record label TEN Music Group and subsequently released her debut compilation recording, the extended play Introducing, in January 2013. Read more on Wikipedia

Since 2007, the English Wikipedia page of Zara Larsson has received more than 5,962,904 page views. Her biography is available in 47 different languages on Wikipedia making her the 1,218th most popular singer.

Among singers, Zara Larsson ranks 1,225 out of 3,001. Before her are Lu Han, John Farnham, Simone Simons, George Wassouf, Jahn Teigen, and Ellen Allien. After her are Lenka, Mahsun Kırmızıgül, Guru, Olga Jackowska, Nina Persson, and IU.