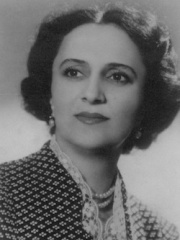 Zara Aleksandrovna Dolukhanova (Armenian: Զարուհի Դոլուխանյան, Russian: Зара Александровна Долуханова; 15 March 1918 – 4 December 2007) was an Armenian mezzo-soprano who achieved fame performing on many lauded radio broadcasts of operas and works from the concert repertoire during the 1940s through the 1960s. Although considered one of Soviet-era Russia's most accomplished opera singers, Dolukhanova made only a relatively small number of appearances on the actual opera stage and her fame rests primarily in her extensive work for radio and performances on the concert stage.Dolukhanova's voice was a rare coloratura-mezzo, of unique clarity and unusually wide range. Considered one of the great singers of the Soviet era, Dolukhanova was notable for her championing of the operas of Gioachino Rossini, drawing particular acclaim for her Isabella in L'italiana in Algeri and Angelina in La Cenerentola. Read more on Wikipedia

Among singers, Zara Dolukhanova ranks 983 out of 3,541. Before her are BoA, Abbey Lincoln, Annie Ross, Marija Šerifović, Matt Monro, and Nas. After her are Rino Gaetano, Ricardo Montaner, Tiny Tim, Loreen, Franca Raimondi, and Marilyn Miller.