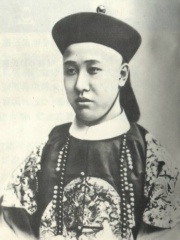 Zaifeng (12 February 1883 – 3 February 1951), formally known by his title Prince Chun, was a Manchu prince and regent of the late Qing dynasty. He was a son of Prince Chun, the seventh son of the Daoguang Emperor, and the father of Puyi, the Last Emperor. Read more on Wikipedia

Since 2007, the English Wikipedia page of Zaifeng, Prince Chun has received more than 276,754 page views. His biography is available in 18 different languages on Wikipedia making him the 3,289th most popular politician.

Among politicians, Zaifeng, Prince Chun ranks 3,268 out of 14,801. Before him are Tokugawa Yoshimune, André-Hercule de Fleury, Mihailo Obrenović, Cardinal-Infante Ferdinand of Austria, Mohammad Shah Qajar, and Harthacnut I of Denmark. After him are Pier Luigi Farnese, Duke of Parma, Albert III, Duke of Saxony, Bettino Craxi, Thessalonike of Macedon, Duchess Sophie Charlotte in Bavaria, and Joseph Berchtold.