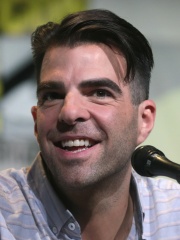 Zachary John Quinto (; born June 2, 1977) is an American actor and film producer. He is known for his roles as Sylar, the primary antagonist from the science fiction drama series Heroes (2006–2010), Spock in the film Star Trek (2009) and its sequels Star Trek Into Darkness (2013) and Star Trek Beyond (2016), Charlie Manx in the AMC series NOS4A2, as well as his Emmy nominated performance in American Horror Story: Asylum. His other film roles include Margin Call, What's Your Number?, Hitman: Agent 47, Snowden, and Hotel Artemis. Read more on Wikipedia

Since 2007, the English Wikipedia page of Zachary Quinto has received more than 6,619,019 page views. His biography is available in 45 different languages on Wikipedia making him the 2,520th most popular actor.