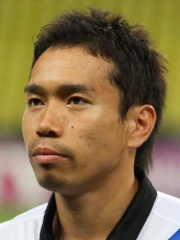 Yuto Nagatomo (長友 佑都, Nagatomo Yūto, born 12 September 1986) is a Japanese professional footballer who plays as a full-back for Japanese club FC Tokyo and the Japan national team.A graduate from the Meiji University, Nagatomo started his professional career with FC Tokyo in 2007, quickly establishing himself as a first choice both within the team and the Japanese national team. He would go on to play in Europe for over a decade, first joining Cesena in 2010, and then enjoying stints with Inter Milan (where he played for seven years, making more than 200 total appearances and even captaining the team for a brief period of time), Galatasaray and Olympique Marseille. He would then go back to his boyhood club FC Tokyo in September 2021.During his club career, he won a J.League Cup in 2009 (with Tokyo), a Coppa Italia in 2011 (with Inter Milan), two back-to-back Turkish titles in 2018 and 2019, both a Turkish Cup and a Turkish Super Cup in 2019 (all with Galatasaray). Read more on Wikipedia