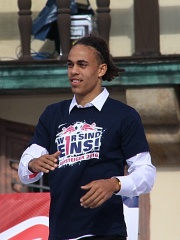 Yussuf Yurary Poulsen (Danish pronunciation: [ˈjusuf ˈpʰʌwlsn̩]; born 15 June 1994) is a Danish professional footballer who plays as a striker for Bundesliga club RB Leipzig and the Denmark national team. He sometimes uses Yurary as his shirt name. After starting his professional career with Lyngby, he transferred to RB Leipzig in 2013, helping them to consecutive promotions from the 3. Read more on Wikipedia

Among soccer players, Yussuf Poulsen ranks 4,063 out of 16,880. Before him are Georges Bereta, Dele Alli, Jean-Paul Bertrand-Demanes, Abou Diaby, Jamal Musiala, and Tiémoué Bakayoko. After him are Pierre Korb, Gabriel Popescu, Neto, Ever Palacios, Kamil Glik, and Ricardo Pereira.