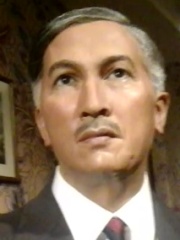 Yusof bin Ishak (12 August 1910 – 23 November 1970) was a Singaporean politician and journalist who served as the first president of Singapore between 1965 and 1970. Before becoming head-of-state, Yusof was a well-known journalist and co-founded Utusan Melayu, which was in circulation till 9 October 2019. He started journalism after he graduated from Raffles Institution in 1929 and in 1932, he joined Warta Malaya, a well-known Malay newspaper company at that time. Read more on Wikipedia

Among politicians, Yusof Ishak ranks 7,806 out of 15,577. Before him are Philippe, Duke of Vendôme, Andries Pretorius, Ilija Garašanin, Zu Yi, Emperor Ai of Jin, and Frederick II, Duke of Mecklenburg-Schwerin. After him are Zannanza, Sultan bin Salman Al Saud, Emperor Go-En'yū, Maurice Yaméogo, Lucia, Countess of Tripoli, and Matilda of Savoy, Queen of Portugal.