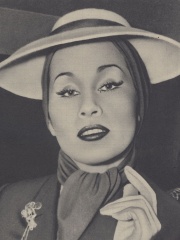 Zoila Augusta Emperatriz Chávarri del Castillo (September 13, 1922 (birth certificate) or September 10, 1922 (later documents) – November 1, 2008), known professionally as Yma Sumac (), was a Peruvian-American coloratura soprano. She was one of the most famous exponents of exotica music during the 1950s. Sumac became an international success based on her extreme vocal range. Read more on Wikipedia

Since 2007, the English Wikipedia page of Yma Sumac has received more than 1,740,074 page views. Her biography is available in 43 different languages on Wikipedia (up from 42 in 2019). Yma Sumac is the 92nd most popular singer (up from 97th in 2019), the 13th most popular biography from Peru and the most popular Peruvian Singer.

Yma Sumac is most famous for her unique voice. Born as Amalia Margarita Sumac Landa de Silva on September 13, 1922 in Cajamarca, Peru, she was a Bolivian citizen who became one of the most popular singers of the 20th century. Sumac's voice was characterized as operatic, and she was best known for singing in the Quechua and Aymara languages.

Among SINGERS In Peru