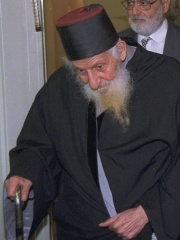 Yitzhak Kaduri (Hebrew: יצחק כדורי, Arabic: إسحاق كدوري), also spelled Kadouri, Kadourie, Kedourie; "Yitzhak" (c. 1898 – 28 January 2006), was a renowned Mizrahi Haredi rabbi and kabbalist who devoted his life to Torah study and prayer on behalf of the Jewish people. He taught and practiced the kavanot of the Rashash. His blessings and amulets were also widely sought to cure people of illnesses and infertility. Read more on Wikipedia

Among religious figures, Yitzhak Kaduri ranks 1,512 out of 2,272. Before him are Maxim of Bulgaria, Raffaele Farina, Jan Łaski, Dimitry of Rostov, Patriarch Alexy I of Moscow, and Dagobert of Pisa. After him are Michel Sabbah, Matthew Stewart, 4th Earl of Lennox, Caspar Schwenckfeld, Abdullah ibn Ja'far, Thomas Kingo, and Bashar ibn Burd.