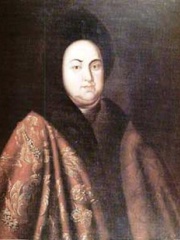 Tsarina Eudoxia Fyodorovna Lopukhina (Russian: Евдоки́я Фёдоровна Лопухина́, tr. Yevdokíya Fyodorovna Lopukhiná; 9 August [O.S. 30 July] 1669 in Moscow – 7 September [O.S. 27 August] 1731 in Moscow) was a Russian Tsaritsa as the first wife of Peter I of Russia, and the last ethnic Russian and non-foreign wife of a Russian monarch. They married on 27 January 1689 and divorced in 1698 . Read more on Wikipedia

Yevdokiya Lopukhina was a peasant woman who was executed in 1671 for witchcraft. She is most famous for being the first person executed for witchcraft in Russia.

Among companions, Yevdokiya Lopukhina ranks 178 out of 687. Before her are Elizabeth of Bosnia, Helen of Greece and Denmark, Faustina the Elder, Isabella of Angoulême, Emma of Waldeck and Pyrmont, and Sophia Charlotte of Hanover. After her are Maria Barbara Bach, Constance of Aragon, Maria Christina of the Two Sicilies, María Isabella of Spain, Arsinoe II, and Fredegund.

Among COMPANIONS In Russia