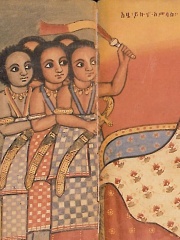 Among politicians, Yekuno Amlak ranks 8,954 out of 15,710. Before him are Antigenes, Şükrü Saracoğlu, Marie I, Countess of Boulogne, Thomas R. Marshall, Mohammad Beheshti, and Mihailo Vojislavljević. After him are Nergal-ushezib, Vera Kholodnaya, John II of Cyprus, Martín Vizcarra, Lucius Cornelius Balbus, and Cyrus Vance.

Among people born in 1300, Yekuno Amlak ranks 38. Before him are George II of Bulgaria, John Mandeville, Arpa Ke'un, Lajin, Mitso Asen of Bulgaria, and Giovanni Dandolo. After him are Lorenzo Tiepolo, Adolf, Count Palatine of the Rhine, John II Orsini, and Thomas Bradwardine. Among people deceased in 1285, Yekuno Amlak ranks 9. Before him are Pope Martin IV, Peter III of Aragon, Francesca da Rimini, Kunigunda of Halych, Theodora of Trebizond, and Philip I, Count of Savoy. After him are Cerverí de Girona and John II of Jerusalem.