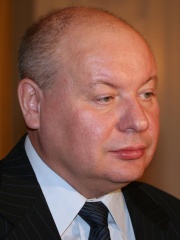 Yegor Timurovich Gaidar (Russian: Его́р Тиму́рович Гайда́р; pronounced [jɪˈɡor tʲɪˈmurəvʲɪtɕ ɡɐjˈdar]; 19 March 1956 – 16 December 2009) was a Soviet and Russian economist, politician, and author, and was the Acting Prime Minister of Russia from 15 June 1992 to 14 December 1992. He was the architect of the controversial shock therapy reforms administered in Russia after the dissolution of the Soviet Union, which brought him both praise and harsh criticism. He participated in the preparation of the Bialowieza agreements. Read more on Wikipedia

Among politicians, Yegor Gaidar ranks 9,831 out of 15,710. Before him are Diodotus II, Garret Hobart, Alexey Bestuzhev-Ryumin, Aparicio Méndez, Prince Adolf of Schaumburg-Lippe, and Gaius Sempronius Tuditanus. After him are Aemilia Tertia, John George I, Prince of Anhalt-Dessau, Ariobarzanes of Persis, Khawaja Nazimuddin, Yakov Malik, and Leo IV, King of Armenia.