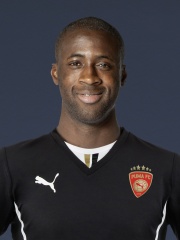 Gnégnéri Yaya Touré (born 13 May 1983) is an Ivorian professional footballer who plays as a midfielder and last played for Chinese Super League club Qingdao Huanghai. Touré aspired to be a striker during his youth and has played centre-back, including for Barcelona in the 2009 UEFA Champions League Final. However, he has spent the majority of his career as a box-to-box midfielder for club and country, where he has been regarded as one of the world's best players in his position. Read more on Wikipedia

Since 2007, the English Wikipedia page of Yaya Touré has received more than 4,832,177 page views. His biography is available in 61 different languages on Wikipedia making him the 611th most popular soccer player.