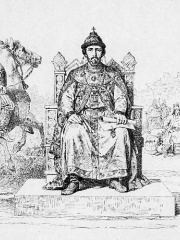 Yaroslav III Yaroslavich (1230–1271) (Russian: Ярослав Ярославич) was the first Prince of Tver and the tenth Grand Prince of Vladimir from 1264 to 1271. Yaroslav and his son Mikhail Yaroslavich presided over Tver's transformation from a sleepy village into one of the greatest centres of power in medieval Russia. Read more on Wikipedia

Page views of Yaroslav of Tvers by language

Among noblemen, Yaroslav of Tver ranks 377 out of 843. Before him are Henry Raspe, Landgrave of Thuringia, Liudolf, Duke of Swabia, Grand Duke Sergei Mikhailovich of Russia, Wolfgang, Count Palatine of Zweibrücken, Henry I, Duke of Burgundy, and Albert IV, Count of Habsburg. After him are Otto I, Count of Burgundy, François de Vendôme, duc de Beaufort, Richeza of Poland, Queen of Castile, William VIII, Duke of Aquitaine, Anne Christine of Sulzbach, Princess of Piedmont, and Archduchess Isabella Clara of Austria.