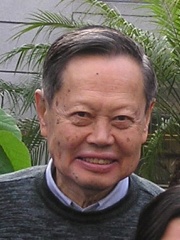 Yang Chen-Ning or Chen-Ning Yang (Chinese: 杨振宁; pinyin: Yáng Zhènníng; born 1 October 1922), also known as C. N. Yang or by the English name Frank Yang, is a Chinese theoretical physicist who made significant contributions to statistical mechanics, integrable systems, gauge theory, and both particle physics and condensed matter physics. He and Tsung-Dao Lee received the 1957 Nobel Prize in Physics for their work on parity nonconservation of weak interaction. The two proposed that one of the basic quantum-mechanics laws, the conservation of parity, is violated in the so-called weak nuclear reactions, those nuclear processes that result in the emission of beta or alpha particles. Read more on Wikipedia

Yang Chen-ning was a Chinese physicist who was most famous for the Yang-Mills theory.

Among PHYSICISTS In China