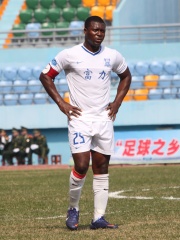 Yakubu Ayegbeni (born 22 November 1982), known as Yakubu, is a Nigerian former professional footballer who played as a striker. His nickname is "The Yak".His performances in the 2002–03 UEFA Champions League for Maccabi Haifa earned a loan move to English club Portsmouth which became permanent as they were promoted to the Premier League in 2003. He has since appeared in over 250 Premier League matches for Portsmouth, Middlesbrough, Everton, and Blackburn Rovers, and is the third highest African goalscorer in Premier League history with 96 goals. Read more on Wikipedia

Since 2007, the English Wikipedia page of Yakubu has received more than 35,558 page views. His biography is available in 41 different languages on Wikipedia making him the 5,470th most popular soccer player.

Page views of Yakubus by language

Among SOCCER PLAYERS In Nigeria