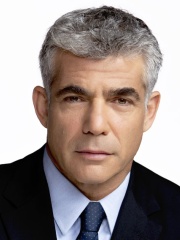 Yair Lapid (Hebrew: יאיר לפיד‎; born 5 November 1963) is an Israeli politician and former journalist serving as chairman of the Yesh Atid party and opposition leader in the Knesset. He served as Minister of Finance from 2013 to 2014. Before entering politics in 2012, Lapid was an author, TV presenter and news anchor. Read more on Wikipedia

Among politicians, Yair Lapid ranks 11,946 out of 15,710. Before him are Faustina, Audrey Azoulay, Ariarathes VIII of Cappadocia, Daniel Morelon, Azzeddine Laraki, and Prince Friedrich Karl of Prussia. After him are Carl Vaugoin, Seankhenre Mentuhotepi, Theo Waigel, Algirdas Butkevičius, Suha Arafat, and Sushma Swaraj.