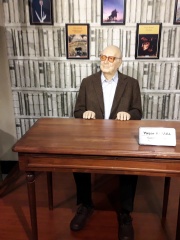 Yaşar Kemal (born Kemal Sadık Gökçeli; 6 October 1923 – 28 February 2015) was a Kurdish writer and human rights activist, and one of Turkey's leading writers. He received 38 awards during his lifetime and had been a candidate for the Nobel Prize in Literature on the strength of Memed, My Hawk.An outspoken intellectual, he often did not hesitate to speak about sensitive issues, especially those concerning the oppression of the Kurdish people. He was tried in 1995 under anti-terror laws for an article he wrote for Der Spiegel highlighting the Turkish Army's destruction of Kurdish villages during the Turkish-Kurdish conflict. Read more on Wikipedia

Since 2007, the English Wikipedia page of Yaşar Kemal has received more than 105,591 page views. His biography is available in 42 different languages on Wikipedia making him the 630th most popular writer.

Among writers, Yaşar Kemal ranks 627 out of 4,883. Before him are Sei Shōnagon, Osip Mandelstam, Frank Herbert, Dashiell Hammett, Witold Gombrowicz, and Hermann Broch. After him are Aziz Nesin, Giosuè Carducci, Jin Yong, Marcus Terentius Varro, Geoffrey of Monmouth, and A. J. Cronin.