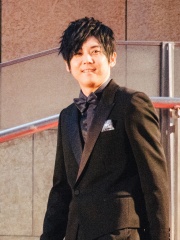 Yuki Kaji (梶 裕貴, Kaji Yūki, born September 3, 1985) is a Japanese voice actor and singer affiliated with the agency VIMS. He has voiced many roles, such as Shion in No. 6, Haruaki Yachi in C3, Eren Jaeger in Attack on Titan, Lyon Vastia in Fairy Tail, Issei Hyodo in High School DxD, Shu Ouma in Guilty Crown, Alibaba in Magi: The Labyrinth of Magic, Kazuya Ichinose and Akio Fudou in Inazuma Eleven: Orion no Kokuin, Citron (Clemont in English dub) in Pokémon XY, Meliodas and Zeldris in The Seven Deadly Sins, Yukine in Noragami, Speed-O'Sound Sonic in One-Punch Man, Kanato Sakamaki in Diabolik Lovers, Finnian in Black Butler, Kozume Kenma in Haikyu!!, Mei Narumiya in Ace of Diamond, Kakeru Yuiga in Norn9, Shoto Todoroki in My Hero Academia, Johnny Joestar in JoJo's Bizarre Adventure: Eyes of Heaven, and Koichi Hirose in JoJo's Bizarre Adventure. He was part of the four-unit singing group G.Addict, which was part of the Goulart Knights project, and has acted as one of the main protagonists in the movie Kami Voice: The Voice Makes a Miracle. Read more on Wikipedia