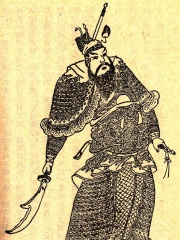 Xiahou Yuan (pronunciation ) (died 219), courtesy name Miaocai, was a Chinese military general and politician serving under the warlord Cao Cao in the late Eastern Han dynasty of China. He is known for his exploits in western China (in parts of present-day Gansu, Ningxia and Shaanxi provinces) in the 210s, during which he defeated Cao Cao's rivals Ma Chao and Han Sui in Liang Province and the surrounding areas, and forced several Di and Qiang tribal peoples into submission. He was killed in action at the Battle of Mount Dingjun while defending Hanzhong Commandery from attacks by a rival warlord Liu Bei. Read more on Wikipedia

Xiahou Yuan is most famous for being a military general in the Three Kingdoms period.

Among people born in 200, Xiahou Yuan ranks 19. Before him are Marcus Claudius Tacitus, Wei Yan, Artemidorus, Alexander of Aphrodisias, Claudius Aelianus, and Zhang Jue. After him are Gao Shun, Artabanus IV of Parthia, Yu Jin, Paul of Samosata, Liu Zhang, and Achilles Tatius. Among people deceased in 219, Xiahou Yuan ranks 1. After him are Liu Zhang, Pang De, and Zhang Zhongjing.