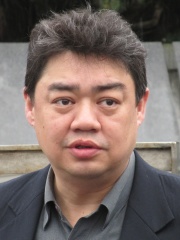 Örkesh Dölet (Uyghur: ئۆركەش دۆلەت‎; alternatively transliterated Uerkesh Davlet), commonly known as Wu'erkaixi (from the Chinese pinyin spelling of his name), is a Chinese dissident of Uyghur heritage known for his leading role during the Tiananmen protests of 1989. He was born in Beijing on 17 February 1968 with ancestral roots in Ili Kazakh Autonomous Prefecture, Xinjiang. He achieved prominence while studying at Beijing Normal University as a hunger striker who rebuked Chinese Premier Li Peng on national television. Read more on Wikipedia

Since 2007, the English Wikipedia page of Wu'erkaixi has received more than 284,135 page views. Her biography is available in 17 different languages on Wikipedia making her the 344th most popular social activist.

Page views of Wu'erkaixis by language

Among social activists, Wu'erkaixi ranks 343 out of 426. Before her are Yagan, Marsha P. Johnson, Lucy Parsons, Sakine Cansız, Wolfe Tone, and Lucy Stone. After her are Claudette Colvin, Eoin O'Duffy, Neerja Bhanot, Hereward the Wake, Otto Warmbier, and Afeni Shakur.