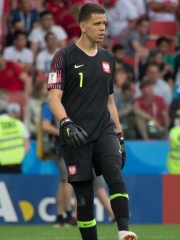 Wojciech Tomasz Szczęsny (pronounced [ˈvɔjt͡ɕɛx ˈʂt͡ʂɛ̃snɨ] (listen); born 18 April 1990) is a Polish professional footballer who plays as a goalkeeper for Serie A club Juventus and the Poland national team. After starting his club career at Legia Warsaw, Szczęsny signed for Arsenal in January 2006, where he made his professional debut in 2009. After a spell on loan with Brentford the following season, he later became the capital club's first choice goalkeeper, winning two FA Cups and being the joint recipient of the 2013–14 Premier League Golden Glove with Petr Čech. Read more on Wikipedia