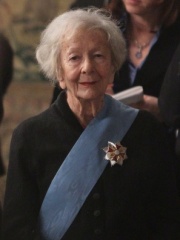 Maria Wisława Anna Szymborska (Polish: [viˈswava ʂɨmˈbɔrska]; 2 July 1923 – 1 February 2012) was a Polish poet, essayist, translator and recipient of the 1996 Nobel Prize in Literature. Born in Prowent, which has since become part of Kórnik, she later resided in Kraków until the end of her life. In Poland, Szymborska's books have reached sales rivaling prominent prose authors: although she once remarked in a poem, "Some Like Poetry" ("Niektórzy lubią poezję"), that no more than two out of a thousand people care for the art.Szymborska was awarded the 1996 Nobel Prize in Literature "for poetry that with ironic precision allows the historical and biological context to come to light in fragments of human reality". Read more on Wikipedia

Since 2007, the English Wikipedia page of Wisława Szymborska has received more than 341,494 page views. Her biography is available in 88 different languages on Wikipedia making her the 224th most popular writer.

Most Popular WRITERS in Wikipedia