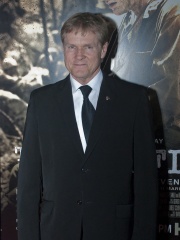 William Thomas Sadler (born April 13, 1950) is an American film and television actor. His television and motion picture roles have included Chesty Puller in The Pacific, Luther Sloan in Star Trek: Deep Space Nine, Sheriff Jim Valenti in Roswell, convict Heywood in The Shawshank Redemption, Senator Vernon Trent in Hard to Kill, and the Grim Reaper in Bill & Ted's Bogus Journey, Tales from the Crypt and Bill & Ted Face the Music, a role for which he won the Saturn Award for Best Supporting Actor, and his role as Colonel Stuart opposite Bruce Willis in Die Hard 2. He played the character of President of the United States, Matthew Ellis, in Iron Man 3, Marvel's Agents of S.H.I.E.L.D., and WHIH Newsfront, all set in the Marvel Cinematic Universe. Read more on Wikipedia

Since 2007, the English Wikipedia page of William Sadler has received more than 44,725 page views. His biography is available in 24 different languages on Wikipedia making him the 1,777th most popular actor.