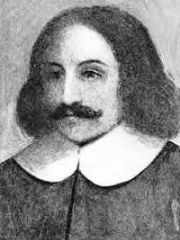 William Bradford (c. 19 March 1590 – May 9, 1657) was an English Puritan separatist originally from the West Riding of Yorkshire in Northern England. He moved to Leiden in Holland in order to escape persecution from King James I of England, and then emigrated to the Plymouth Colony on the Mayflower in 1620. Read more on Wikipedia

Since 2007, the English Wikipedia page of William Bradford has received more than 54,685 page views. His biography is available in 15 different languages on Wikipedia making him the 11,210th most popular politician.