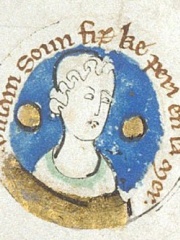 William Ætheling (Middle English: [ˈwiliəm ˈaðəliŋɡ], Old English: [ˈæðeliŋɡ]; 5 August 1103 – 25 November 1120), commonly called Adelin, sometimes Adelinus, Adelingus, A(u)delin or other Latinised Norman-French variants of Ætheling, was the son of Henry I of England by his wife Matilda of Scotland, and was thus heir apparent to the English throne. Read more on Wikipedia

Among noblemen, William Adelin ranks 299 out of 843. Before him are Prince Michael of Kent, Gioffre Borgia, Grand Duchess Kira Kirillovna of Russia, Philibert I, Duke of Savoy, Duke Maximilian Emanuel in Bavaria, and Leopold IV, Duke of Austria. After him are Margaret, Maid of Norway, Fulk III, Count of Anjou, Albrecht, Duke of Bavaria, Duchess Maria Dorothea of Württemberg, Amadeus V, Count of Savoy, and Princess Louise Margaret of Prussia.

Among people born in 1103, William Adelin ranks 6. Before him are Ahmad Yasawi, Harald Gille, André de Montbard, Matilda of Boulogne, and Emperor Toba. After him are Alfonso Jordan, Adeliza of Louvain, Aénor de Châtellerault, and Agnes of Aquitaine, Queen of Aragon. Among people deceased in 1120, William Adelin ranks 2. Before him is Blessed Gerard. After him are Welf II, Duke of Bavaria, Ingegerd of Norway, Baldwin III, Count of Hainaut, and Albert of Aix.