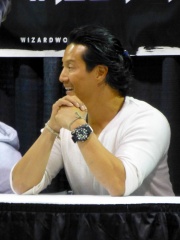 Will Yun Lee (born March 22, 1971) is a Korean-American actor and martial artist. He is best known for his roles as Danny Woo in the supernatural drama Witchblade and Jae Kim in the sci-fi series Bionic Woman. He has also appeared in the films Die Another Day (2002), Elektra (2005) and The Wolverine (2013). Read more on Wikipedia

Page views of Will Yun Lees by language

Among actors, Will Yun Lee ranks 3,626 out of 10,030. Before him are Sergi López, Mildred Davis, Jeremy Wade, Adriana Caselotti, Catherine O'Hara, and Junko Takeuchi. After him are Jaimie Alexander, Michael Beck, Robert Guillaume, Gwen Verdon, Catherine McCormack, and Ed Westwick.