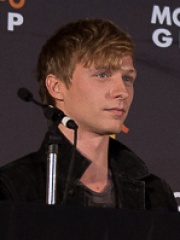 William James Sibree Tudor (born 11 April 1987) is an English actor, known for his role as Olyvar in the HBO series Game of Thrones from 2013 to 2015. He has also appeared in the miniseries The Red Tent, and the Channel 4 series Humans. Read more on Wikipedia

Since 2007, the English Wikipedia page of Will Tudor has received more than 723,505 page views. His biography is available in 15 different languages on Wikipedia. Will Tudor is the 9,042nd most popular actor, the 5,767th most popular biography from United Kingdom and the 1,051st most popular British Actor.

Page views of Will Tudors by language

Among actors, Will Tudor ranks 9,042 out of 10,030. Before him are Rati Agnihotri, Todd Lowe, Cerina Vincent, Rina Ikoma, Eve Hewson, and Nadia Bjorlin. After him are Dana Davis, Josh Helman, Ann Jillian, Charlotte Hope, Eloise Mumford, and Carolina Gynning.