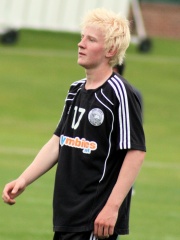 William James Hughes (born 17 April 1995) is an English professional footballer who plays as a midfielder for Premier League club Crystal Palace. Having graduated a scholarship with Derby County, Hughes made his first team breakthrough during the 2012–13 season; his performances resulted in him earning attraction from multiple clubs across Europe. Hughes made his move to the Premier League with Watford in 2017, helping the Hornets reach the FA Cup final in 2019 and maintain top-flight football for three seasons. Read more on Wikipedia

Page views of Will Hughes by language

Among soccer players, Will Hughes ranks 14,881 out of 16,923. Before him are Wataru Inoue, Matthew Lowton, Hideyuki Ishida, Koki Saito, Hideki Ishige, and Harry Arter. After him are Fábio Pena, Tadayo Fukuo, Shoma Mizunaga, Pontus Dahlberg, Kosuke Onose, and Itacaré.