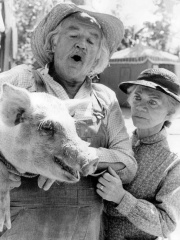 Will Geer (born William Aughe Ghere, March 9, 1902 – April 22, 1978) was an American actor, musician, and social activist, who was active in labor organizing and other movements in New York and Southern California in the 1930s and 1940s. In California he befriended rising singer Woody Guthrie. They both lived in New York for a time in the 1940s. Read more on Wikipedia

Since 2007, the English Wikipedia page of Will Geer has received more than 1,748,771 page views. His biography is available in 16 different languages on Wikipedia making him the 3,846th most popular actor.

Page views of Will Geers by language

Among actors, Will Geer ranks 3,798 out of 8,832. Before him are Claudia Wells, Carla Laemmle, Maribel Verdú, Bobby Cannavale, Edie McClurg, and Kristofer Hivju. After him are Eleonora Giorgi, Anne Shirley, Richard Simmons, Jeffrey Katzenberg, Manoj Bajpayee, and Naseeruddin Shah.