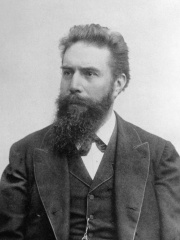 Wilhelm Conrad Röntgen (; German: [ˈvɪlhɛlm ˈʁœntɡən]; 27 March 1845 – 10 February 1923) was a German mechanical engineer and physicist, who, on 8 November 1895, produced and detected electromagnetic radiation in a wavelength range known as X-rays or Röntgen rays, an achievement that earned him the first Nobel Prize in Physics in 1901. Read more on Wikipedia

Since 2007, the English Wikipedia page of Wilhelm Röntgen has received more than 1,498,237 page views. His biography is available in 124 different languages on Wikipedia making him the 40th most popular physicist.

Among people born in 1845, Wilhelm Röntgen ranks 4. Before him are Alexander III of Russia, Ludwig II of Bavaria, and Georg Cantor. After him are Gabriel Fauré, George I of Greece, Gabriel Lippmann, Élie Metchnikoff, Charles Louis Alphonse Laveran, Amadeo I of Spain, Ludwig III of Bavaria, and Carl Spitteler. Among people deceased in 1923, Wilhelm Röntgen ranks 5. Before him are Gustave Eiffel, Sarah Bernhardt, Vilfredo Pareto, and Johannes Diderik van der Waals. After him are Princess Helena of the United Kingdom, Jaroslav Hašek, Constantine I of Greece, Pancho Villa, John Venn, Warren G. Harding, and Dietrich Eckart.