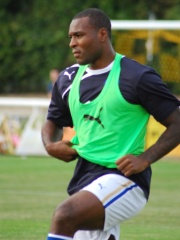 Westley Nathan Morgan (born 21 January 1984) is a professional footballer who plays as a defender for and is captain of Premier League club Leicester City and formerly the Jamaica national team. Morgan spent the majority of his career with his boyhood club, Nottingham Forest, playing 402 matches and scoring 14 goals. He was their longest-serving player when he transferred to Leicester City in January 2012. Read more on Wikipedia

Since 2007, the English Wikipedia page of Wes Morgan has received more than 1,682,229 page views. His biography is available in 35 different languages on Wikipedia making him the 4,958th most popular soccer player.