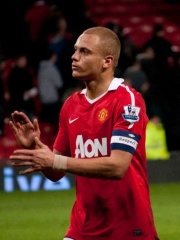 Wesley Michael Brown (born 13 October 1979) is an English former professional footballer who played as a defender. Brown began his career with Manchester United, joining the club's academy at the age of 12 in 1992. After turning professional in 1996, he made his senior debut in 1998 and became a semi regular first team player during the 1998–99 season, when the club won the Treble. Read more on Wikipedia

Among people born in 1979, Wes Brown ranks 218. Before him are Jacqueline Bracamontes, Sabina Babayeva, Antoaneta Stefanova, Nick Stahl, Doni, and Mindy Kaling. After him are Anthony Réveillère, Daniel Narcisse, Epiphanius I of Ukraine, Hindi Zahra, Nika Melia, and Lee Dong-gook.