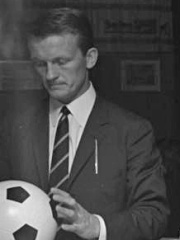 Werner Olk (born 18 January 1938) is a German former professional football player and manager. He spent his career in the 1960s through to 1970 with German club Bayern Munich in the Bundesliga. His honors with Bayern include the DFB-Pokal in 1966, 1967 and 1969; winner of the German Championship in 1969; and winner of the European Cup Winners' Cup in 1967. Read more on Wikipedia

Since 2007, the English Wikipedia page of Werner Olk has received more than 51,836 page views. His biography is available in 15 different languages on Wikipedia. Werner Olk is the 164th most popular coach, the 801st most popular biography from Poland and the 2nd most popular Polish Coach.

Among COACHES In Poland

Among coaches born in Poland, Werner Olk ranks 2. Before him are Henryk Kasperczak (1946). After him are Paweł Janas (1953).