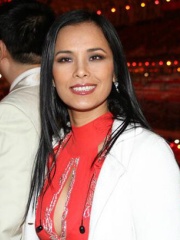 Wei Wei (simplified Chinese: 韦唯; traditional Chinese: 韋唯; pinyin: Wéi Wéi; born 28 September 1963) is a Mandopop singer, philanthropist, and current Standing Committee Member of the Chinese Peasants' and Workers' Democratic Party since 2010. She previously served as Standing Committee Member of the All-China Youth Federation from 2005 to 2010, as China's Forestry Ambassador to the United Nations of the National Forestry and Grassland Administration from 2009 to 2010, and as Ambassador of the Chinese Football Association from 2008 to 2009. Wei is largely considered a national treasure in China, and one of its most iconic singers. Read more on Wikipedia

Since 2007, the English Wikipedia page of Wei Wei has received more than 9,384 page views. Her biography is available in 18 different languages on Wikipedia making her the 1,657th most popular singer.