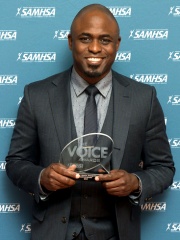 Wayne Alphonso Brady (born June 2, 1972) is an American actor, singer, comedian, producer, game show host, television personality and presenter, who is a regular on the American version of the improvisational comedy television series Whose Line Is It Anyway? He was the host of the daytime talk show The Wayne Brady Show, the original host of Fox's Don't Forget the Lyrics!, and has hosted Let's Make a Deal since its 2009 revival. Read more on Wikipedia

Since 2007, the English Wikipedia page of Wayne Brady has received more than 5,028,027 page views. His biography is available in 16 different languages on Wikipedia making him the 8,332nd most popular actor.