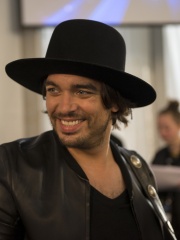 Willem Bijkerk (Dutch pronunciation: [ˈʋɪləm ˈbɛikɛr(ə)k]; born 20 April 1980), known professionally as Waylon, is a Dutch singer. His stage name came from the name of his idol Waylon Jennings. He represented the Netherlands with Ilse DeLange as part of the Common Linnets at the Eurovision Song Contest 2014, finishing in second place in the final. Read more on Wikipedia

Page views of Waylons by language

Among singers, Waylon ranks 2,057 out of 3,541. Before him are Sido, Lil Dicky, Gülşen, Nora Bayes, Glennis Grace, and Lilian Garcia. After him are Milan Stanković, Tamara Todevska, Karoline Krüger, Adelaide Hall, Salvatore Licitra, and Tiffany Young.

Among SINGERS In Netherlands