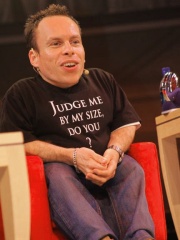 Warwick Ashley Davis (born 3 February 1970) is an English actor. He played the title character in Willow (1988) and the Leprechaun film series (1993–2003), several characters in the Star Wars film series (1983–2019), most notably the Ewok Wicket, and Professor Filius Flitwick and the goblin Griphook in the Harry Potter film series (2001–2011). Davis starred as a fictionalised version of himself in the sitcom Life's Too Short (2012–2013). Read more on Wikipedia

Among actors, Warwick Davis ranks 2,960 out of 9,996. Before him are Anna Galiena, Simon MacCorkindale, Emily Deschanel, Ita Ever, John Kitzmiller, and Madhubala. After him are Michael McKean, Lydia Shum, Mikheil Chiaureli, Stephen McKinley Henderson, Herbert Ross, and Richard Bremmer.