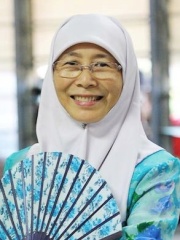 Dato' Seri Wan Azizah binti Wan Ismail (Jawi: وان عزيزة بنت وان إسماعيل; born 3 December 1952) is a Malaysian politician who served as the 12th Deputy Prime Minister and Minister of Women, Family and Community Development in the Pakatan Harapan (PH) administration under former Prime Minister Mahathir Mohamad from May 2018 to the collapse of the PH administration during a political crisis in February 2020. She was the first female Deputy Prime Minister, the first female Leader of the Opposition and the highest ever female political officeholder in the history of Malaysia. She has served as the Member of Parliament (MP) for Pandan since May 2018 as well as Permatang Pauh, on behalf of her husband Anwar Ibrahim, from November 1999 to March 2008 and again from May 2015 to May 2018. Read more on Wikipedia

Among politicians, Wan Azizah Wan Ismail ranks 13,016 out of 15,710. Before her are Silli-Adad, Robert A. Taft, Lloyd Bentsen, José Ignacio Pavón, Ashur-nirari I, and Abdul Aziz al-Hakim. After her are Rim-Sin II, Nurul Amin, Jalal Dabagh, Pushpa Kamal Dahal, Hubert Védrine, and Kliment of Tarnovo.