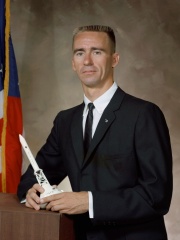 Ronnie Walter Cunningham (born March 16, 1932) is a retired American astronaut. In 1968, he was a lunar module pilot on the Apollo 7 mission. He was NASA's third civilian astronaut (after Neil Armstrong and Elliot See), and has also been a fighter pilot, physicist, entrepreneur, venture capitalist, and author of the 1977 book The All-American Boys. Following the deaths of Donn F. Read more on Wikipedia

Among people born in 1932, Walter Cunningham ranks 208. Before him are Enzo Mari, Saye Zerbo, Alfred Worden, Karekin I, Francis Arinze, and Max Gallo. After him are Nikolay Rukavishnikov, Vitold Fokin, Per Nørgård, Dana Scott, Tiny Tim, and Henri Nouwen.