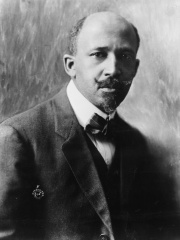 William Edward Burghardt Du Bois ( dew-BOYSS; February 23, 1868 – August 27, 1963) was an American sociologist, socialist, historian, civil rights activist, Pan-Africanist, author, writer and editor. Born in Great Barrington, Massachusetts, Du Bois grew up in a relatively tolerant and integrated community, and after completing graduate work at the University of Berlin and Harvard, where he was the first African American to earn a doctorate, he became a professor of history, sociology and economics at Atlanta University. Read more on Wikipedia

Since 2007, the English Wikipedia page of W. E. B. Du Bois has received more than 5,587,449 page views. His biography is available in 51 different languages on Wikipedia making him the 179th most popular social activist.

Page views of W. E. B. Du Bois by language