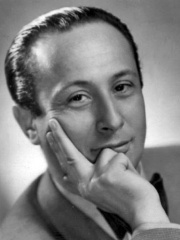 Władysław Szpilman (Polish pronunciation: [vwaˈdɨswaf ˈʂpʲilman]; 5 December 1911 – 6 July 2000) was a Polish pianist and classical composer of Jewish descent. Szpilman is widely known as the central figure in the 2002 Roman Polanski film The Pianist, which was based on Szpilman's autobiographical account of how he survived the German occupation of Warsaw and the Holocaust. Szpilman studied piano at music academies in Berlin and Warsaw. Read more on Wikipedia

Since 2007, the English Wikipedia page of Władysław Szpilman has received more than 1,532,240 page views. His biography is available in 39 different languages on Wikipedia making him the 25th most popular musician.

Among MUSICIANS, Władysław Szpilman ranks 25 out of 2,258. Before him are Brian May, Naruhito, Mark Knopfler, Chuck Berry, B.B. King, and Eric Clapton. After him are Cat Stevens, Miles Davis, Giuseppe Tartini, Bon Scott, Frank Zappa, and Jeff Beck.