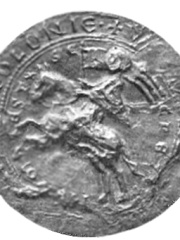 Władysław (also named Włodzisław) Odonic (nicknamed Plwacz) (Polish: Władysław (Włodzisław) Odonic (Plwacz); Latin: Ladislaus) (c. 1190 – 5 June 1239) was a duke of Kalisz 1207–1217, duke of Poznań 1216–1217, ruler of Ujście in 1223, ruler of Nakło from 1225, and duke of all Greater Poland 1229–1234; from 1234 until his death he was ruler over only the north and east of the Warta river (some historians believed that shortly before his death, he lost Ujście and Nakło). He was a son of Duke Odon of Kalisz by his wife Viacheslava, daughter of Prince Yaroslav Osmomysl of Halych. Read more on Wikipedia

Among noblemen, Władysław Odonic ranks 712 out of 843. Before him are Duchess Marie of Württemberg, Princess Adelheid of Anhalt-Bernburg-Schaumburg-Hoym, William IV, Count of Toulouse, Henry I, Margrave of Brandenburg-Stendal, Günther Victor, Prince of Schwarzburg, and John Ernest I, Duke of Saxe-Weimar. After him are Duchess Marie Louise of Mecklenburg-Schwerin, Prince Constantijn of the Netherlands, Friedrich Josias, Prince of Saxe-Coburg and Gotha, Frederick, Hereditary Prince of Anhalt-Dessau, Louis III, Duke of Württemberg, and Aliya bint Ali.

Among noblemen born in Poland, Władysław Odonic ranks 13. Before him are Richeza of Poland, Queen of Castile (1140), Anna Catherine Constance Vasa (1619), Jadwiga of Kalisz (1266), Catherine of Brandenburg-Küstrin (1549), Ernst Gunther, Duke of Schleswig-Holstein (1863), and Sophia Jagiellon, Duchess of Brunswick-Lüneburg (1522).