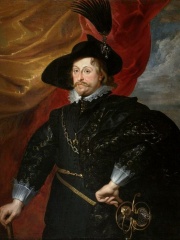 Władysław IV Vasa or Ladislaus IV Vasa (9 June 1595 – 20 May 1648) was king of Poland, of the House of Vasa, who ruled from 1632 until his death in 1648. Władysław IV was the son of Sigismund III Vasa (Polish: Zygmunt III Waza) and his wife, Anna of Austria (also known as Anna of Habsburg). Władysław was elected Tsar of Russia by the Seven Boyars in 1610 when the Polish army captured Moscow, but did not assume the throne due to his father's position and a popular uprising. Read more on Wikipedia

Since 2007, the English Wikipedia page of Władysław IV Vasa has received more than 510,030 page views. His biography is available in 50 different languages on Wikipedia making him the 594th most popular politician.

Among POLITICIANS, Władysław IV Vasa ranks 594 out of 14,801. Before him are Rurik, Juliana of the Netherlands, Sweyn Forkbeard, Aldo Moro, Vajiralongkorn, and Enver Pasha. After him are Arthur Seyss-Inquart, Ladislaus the Posthumous, Frederick William II of Prussia, Elena Ceaușescu, Andrew Jackson, and Wilhelmina of the Netherlands.