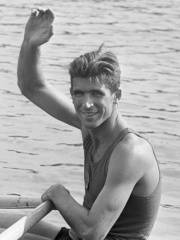 Vyacheslav Nikolayevich Ivanov (Russian: Вячеслав Николаевич Иванов; born 30 July 1938) is a former rower, and one of the most accomplished rowers of his generation. He rowed for the Soviet Union, and he won the Olympic gold medals in the single sculls class at the 1956 Melbourne Games, the 1960 Rome Games and the 1964 Tokyo Games.Ivanov was the first man to win the single sculls event three times in the Olympics. At the time, only Americans John B. Kelly Sr. Read more on Wikipedia

Since 2007, the English Wikipedia page of Vyacheslav Ivanov has received more than 12,612 page views. His biography is available in 20 different languages on Wikipedia making him the 288th most popular athlete.

Among ATHLETES In Russia